Over the Counter Options May Alleviate Some Severe Migraines 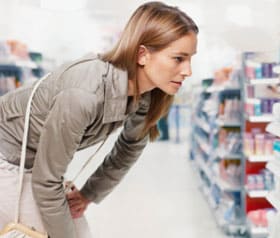 Ibuprofen and Excedrin both relieve the pain and symptoms of severe migraines better than placebos, according to a new study. Researchers re-analyzed data from a clinical trial and found that more than half of the people taking either of the two non-prescription drugs reported some relief, though Excedrin, containing caffeine, performed best.

Excedrin, a combination of acetaminophen, aspirin and caffeine, is currently recommended only for mild or moderate headaches, as is ibuprofen. Migraine medications like Imitrex, for severe migraine, are only available by prescription in the U.S.

At the two-hour time point, 62% of Excedrin users reported some headache relief from the medication, compared to 54% of ibuprofen users and 47% of placebo users, according to the results published online April 14 in Cephalalgia.

Aside from being backed by the pharmaceutical company, the study was a post hoc analysis, which weakens the results, and a large number of people in the placebo group reported some headache relief. Excedrin may be appropriate for severe migraine headaches in situations where (sufferers) may not be able to access other medications or may not want to take narcotics.

Utilization of combination analgesics is dangerous. Taking six to eight pills per day is not the way to utilize any analgesic product. It is widely recognized now that overuse of pain medications that are available without a prescription can lead to rebound headaches, thereby increasing the frequency of migraines.